I flew to San Francisco yesterday to do some sight seeing, visit my colleagues in NRC Palo Alto, and attend CCNC in Las Vegas next week. The flight was pretty long. I took the 6:15 flight to Amsterdam from Helsinki (i.e. I got up 3:30 am) and was supposed to leave to SF at 11:10. Unfortunately some idiot left some drugs (cocaine??) on the plane which resulted in a 1.5 hour delay to search the plane for more. The flight itself was pretty uneventful. The plane was a Boeing 777-200 which I liked a whole lot better than the 747’s I’ve flown so far on trans atlantic flights. The food was pretty decent (considering quality of usual in flight meals). Additionally, the in flight entertainment system was much better than what I’ve seen before. I saw several nice movies during the flight: Rush Hour 3, Mr Bean’s Holiday, Star Dust and Wallace & Gromit: Curse Of The Were-Rabbit. The system had a pretty decent selection of a few dozen movies with quite a few recent ones. Plenty to see on the way back.

Additionally, I met an old friend from Groningen where I lived a few years ago on the plane (six seats behind me!). She is living in San Franciso now with her husband and I’m having dinner at their place tonight. Small world.

My jet lag was nicely compensated by not sleeping for 26 hours. So I had no problems falling asleep at 21:00 and waking up well rested at 7:30. The hotel is pretty cool. It’s the Pickwick, 1 block from Powel Street station on Market Street. This morning I was planning to take the cable train from there (somebody gave me a ticket before I left). Unfortunately they had some mechanical trouble so I had to walk. I walked all the way to Fisherman’s Wharf and got some great views of San Francisco on the way. It seems to me the cable tram is for sissies anyway.

The only disappointment seems to be the weather. This morning it was pretty cloudy and around noon it started raining. On my way back I visited the Apple store to drool at over the cool stuff they have there. I played a bit with the ipod touch and was pretty impressed with it. Particularly the browser is very cool and I was very impressed with how it scrolls and zooms in and out of pages.

If it had a bit more flash memory I would probably buy one. 60+ GB would be about right for me (right now max is 16). My current ipod photo has 60 GB and that seems to be plenty for me.

Right now I’m relaxing a bit in my hotel room, sipping a coke and enjoying the free (!) wifi. Of course I am taking lots of pictures (despite the weather). I’ve gimped up one, the rest will follow when I’m back home and can use photoshop (the Gimp is comparatively useless/unusable): 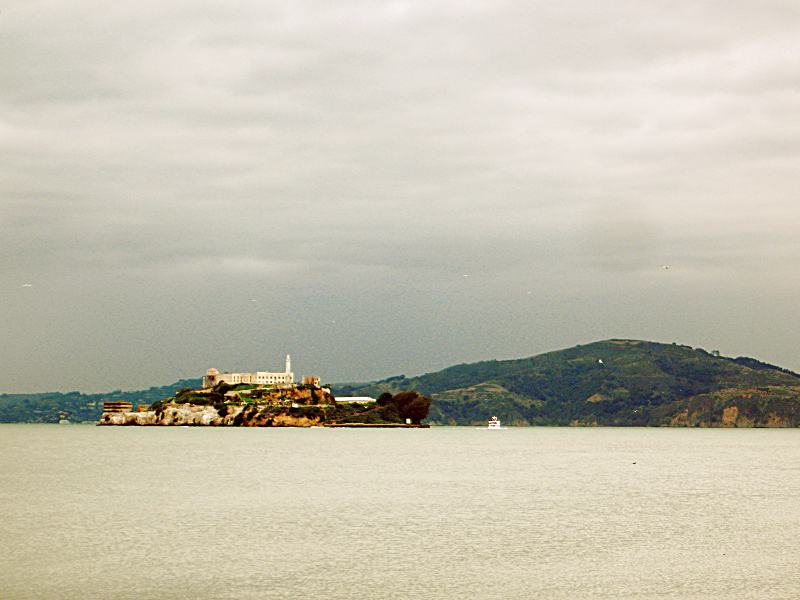