Today I shot a few pictures with my new camera. Wow. It’s very nice. It performs pretty much as explained on dpreview. Conditions were not ideal for photography. It was very cloudy and rainy. There was a thick layer of clouds and the landscape was still covered in (melting) snow. This is difficult for the camera because it has to compensate for the snow and the lack of light. Overall, the camera performed quite well.

As predicted, the camera suffers from quite a bit of color noise if iso values are increased. Basically, anything above 100 has noise. At iso 400, the noise is so bad that this setting should be avoided most of the time. Essentially this is an issue with all digital compact cameras. Other than this, image quality is excellent. And of course the image resolution is 8MP, so a bit of noise is not that bad.

Besides, filtering away color noise is something photoshop is much better at than most cameras. One of the things that attracted me to this camera is that it doesn’t overdo it on filtering noise and throwing away all the details in the process. Similarly, it doesn’t ‘improve’ the contrast which also translates into more detail. The downside of course is that if you want this, you need to tune the pictures yourself in photoshop. That is no problem for me. Lets start with the lens. This is a 28mm equivalent camera which means that it has a slightly wider angle of view than normal 35 mm equivalent cameras. This is very nice since that means you don’t have to walk all the way back to get your subject framed. It also has a nice zoom range (3.6x). If find that shots at 3x zoom both with this and my previous camera to be quite unmanagable unless the camera is on some stable surface. The resolution of the pictures is of course excellent so I can crop away large portions of the photo and still have something that looks great when printed.

The picture above, is a good example of a wide angle shot. Sadly I had to throw away a lot of detail to get the picture down to a web friendly size. Also the picture was touched up in photoshop a bit to cover up for the fact that this was not really a good shot (sun is behind the building, well the clouds).

This shot is probably the best of the shots I made today. Basically, I walk this path every morning on my way to work. To the right (of the path) is the (frozen) sea. The only things I manipulated in this picture are the levels and curves. Because of the poor light conditions, the original is a bit dark. Also, I must learn to keep an eye on the histogram. Probably I could have gotten a bit more out of the situation with a bit more fiddling with the camera. To give an impression of the number of pixels that were in the original of this picture, here’s a cropped piece of the same shot: 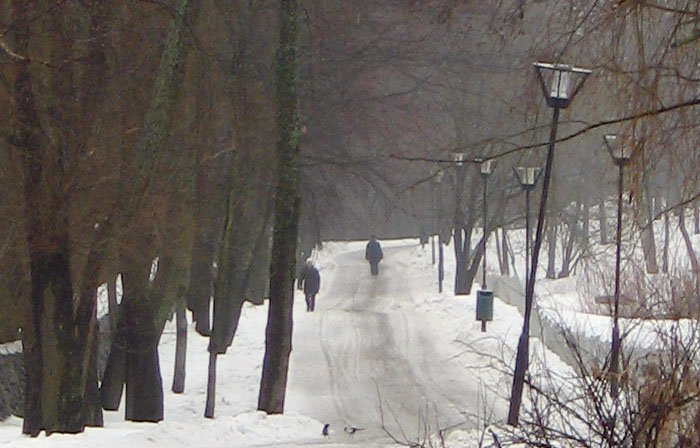 So, quite impressive amount of detail. And again, the conditions were really bad for taking photos. This shot was taken at 1/60 second shutter speed. You can’t go much lower without risking a lot of motion blur.

This camera is really easy to use and has a nice user interface. Two elements that not all reviewers enjoyed are the sliding cover (which doubles as on/off switch) and the rotating click wheel thingy (sort of a mechanical equivalent of the ipod wheel). I must say I like both. Especially the wheel thingy makes it really easy to adjust things like shutter speed, aperture or even focus. Much nicer than messing with tiny left & right buttons (as on my powershot A40).

You can find the shots above, and some more, on my photo site.